Category page of all posts on the web site that are tagged as related to benchmarking including for Raspberry Pis such as pibenchmarks.com It costs about 1/3rd of what a Raspberry Pi does while coming with 2GB of memory. It’s widely available as well (I got mine from Amazon Prime with overnight delivery). Today we’ll be taking a look at the “Le Potato” as well as benchmarking it to see how well it can perform. I recently wrote a getting started guide for the Tinker Board as even though the newer models tend to be quite expensive the older models can often be found for a lot cheaper. In this guide we are going to do something more advanced and are going to actually move our root filesystem to a SSD!

I have the original variant (the Tinker Board 1 S) and that is what I will be using for this guide but this should work on all Tinker Boards (including models without the eMMC). The Tinker Board 2 will have faster performance as the USB ports are USB 3.0 vs. USB 2.0 on the original Tinker Board. If you don’t have the S model with the eMMC this method will require a sacrificial SD card to serve as the bootloader.

This is an old method that I first covered for the Raspberry Pi before it supported native USB booting. I’ve also covered it here for the Orange Pi Zero 2. The SD card/eMMC serves as the bootloader but our root filesystem will be on the SSD. This is a fantastic method for any board that doesn’t natively support booting the OS from a USB storage device. During my recent coverage of SBCs I’ve been benchmarking them using SSDs. The process for booting from a SSD varies across different boards. I’ve found the documentation for some of these to be lacking / nonexistent and the Orange Pi Zero 2 is one of these.

Today I wanted to benchmark the Orange Pi Zero 2 with the SSD and given the lack of documentation I’m going to document my process for setting it up. The Orange Pi Zero 2 will require a sacrificial SD card to bootstrap the process and has USB 2.0 ports. With those limitations in mind let’s set it up and see how it performs! Configuring the ODROID N2+ for USB booting can be a little bit tricky. There are guides out there that will both use a SD card to bootstrap the SSD booting and other guides that use Petitboot but have complex setup instructions.

Today I want to show you a simple method that I used to get SSD booting set up on the ODROID N2+ so I could perform my storage benchmarking on the device for my review. I will be using a NVMe SSD but you may use other types of SSDs as well. Let’s get started! I recently received several ODROID products I wanted to review and benchmark in my quest to explore the rest of the SBC world outside of Raspberry Pi. Today we’re going to cover the ODROID XU4Q!

We’ll cover the pros and cons of the board and then benchmark the board with a official Hardkernel eMMC module. Let’s get started! I’ve covered eMMC modules on the site before as being a fantastic performance option. Today I received some Hardkernel eMMC modules that I wanted to do some performance testing to see how they perform as well as a guide for how to get started with them.

These are promised to be ready to go out of the box. I will test that claim and then we will do some performance benchmarking. No matter what happens we will also do a fresh reimage of the module to show the complete process of getting them set up. Let’s begin! Today I’m very excited to review the ODROID M1 board. I bought this board for a couple of reasons. The first was that it is one of the top rated (and the top rated) boards on my Pi Benchmarks storage benchmarking website.

The second reason was a recommendation from you guys on one of my articles to check out and review the board! This will be my very first ODROID board. Definitely let me know if there’s more boards I need to check out that I haven’t covered as I’m actively investigating alternative SBCs to the Raspberry Pi due to the ongoing shortage I recently got a Orange Pi i96 (thanks munecito!) and this board is very exciting because it was purchased on sale for ~$10! That is insanely cheap. The reason it’s so cheap is because it’s a headless board that doesn’t contain any display-out ports.

If you are going to be using the board headless anyways (I use most of my SBCs headlessly) you may be able to save a fortune with this board. Let’s get started! The eMMC to SD card adapter shows up a lot in IoT devices. I have owned one for my Raspberry Pi for a while and they are fantastic.

In this article I will explain what these devices are, the main advantages of them (speed/performance) and benchmark some eMMCs to show performance differences. By the end of this article this should give you an idea if this is a type of device you’d want to work with / use.

For illustration purposes imagine that the IO board is the “motherboard” and the Compute Module 4 is the CPU that you plug into the CPU socket. That’s essentially the relationship between the two!

They come in all shapes and sizes. Some of them even have PCIe and I’ve covered before how to take advantage of true NVMe on the CM4. Today I wanted to show you some of the different IO boards for the Compute Module 4 I have and what features / traits led me to want to try them. Let’s get started! 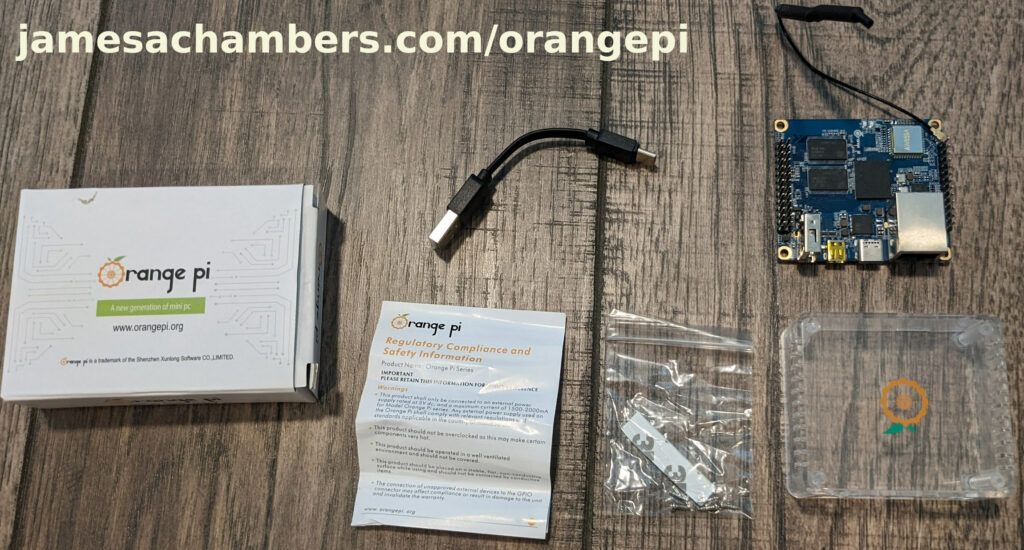 Recently for my storage benchmarking site I had a GitHub issue opened about the Orange Pi Zero 2 not being able to complete the storage benchmark successfully. We were able to get the board going after a lot of troubleshooting but it was pretty difficult to troubleshoot as I had never had one of these boards before.

Until now! I recently received my first and only ever hardware donation to the site from munecito who graciously donated one of these boards to help improve the benchmark (it did not only for SBCs but it now supports PCs as well). Thank you munecito!

I was very interested in how this board compares to the Raspberry Pi experience and ecosystem because we are having a massive Raspberry Pi shortage right now and that is exactly what we are going to do. I also have some general tips for getting the most out of the Orange Pi based on our troubleshooting experience. Let’s proceed! 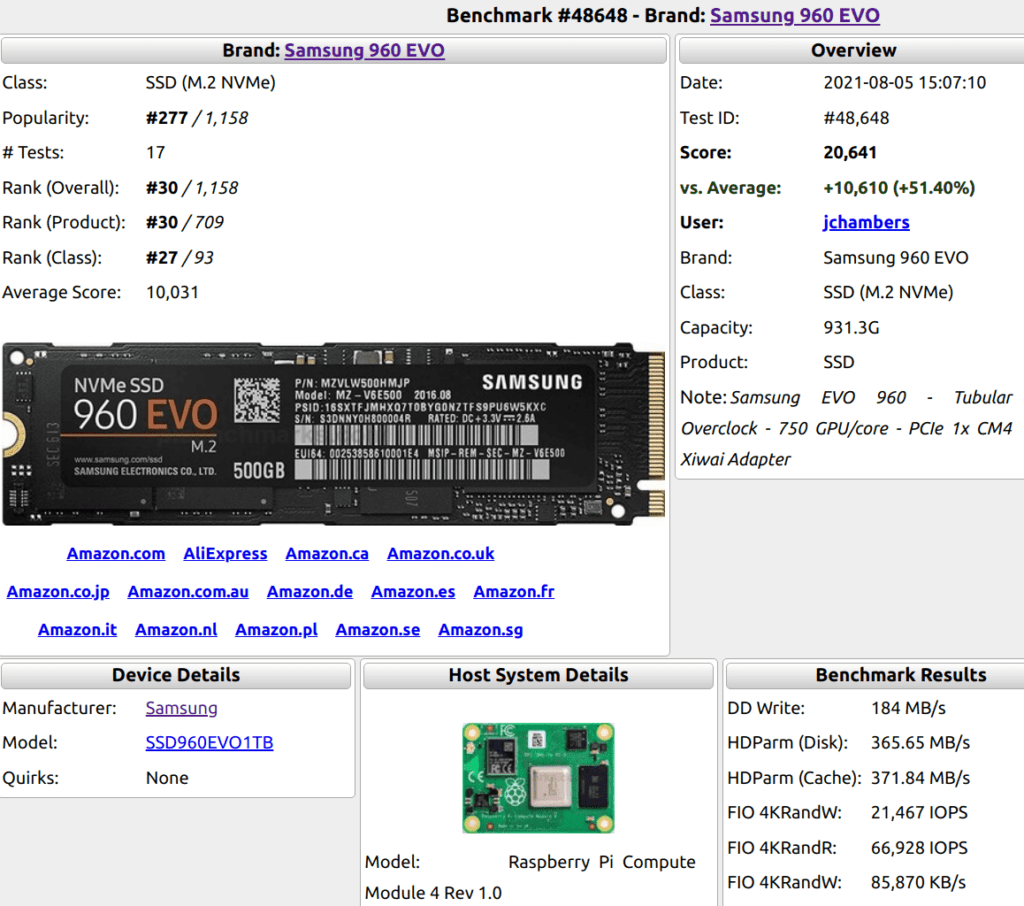 It has been a while since I covered storage benchmarks on the Raspberry Pi because every time I sat down to write it I ended up adding new features to the SBC storage benchmarks web site and it never got finished. Definitely make sure you check out the web site frontend as it will always give you up to date benchmarks!

There definitely have been some changes since my last coverage of this with the Compute Module 4 now dominating the charts by taking advantage of real NVMe via PCIe adapters to achieve speeds never seen before on the Pi. Let’s get right into it! 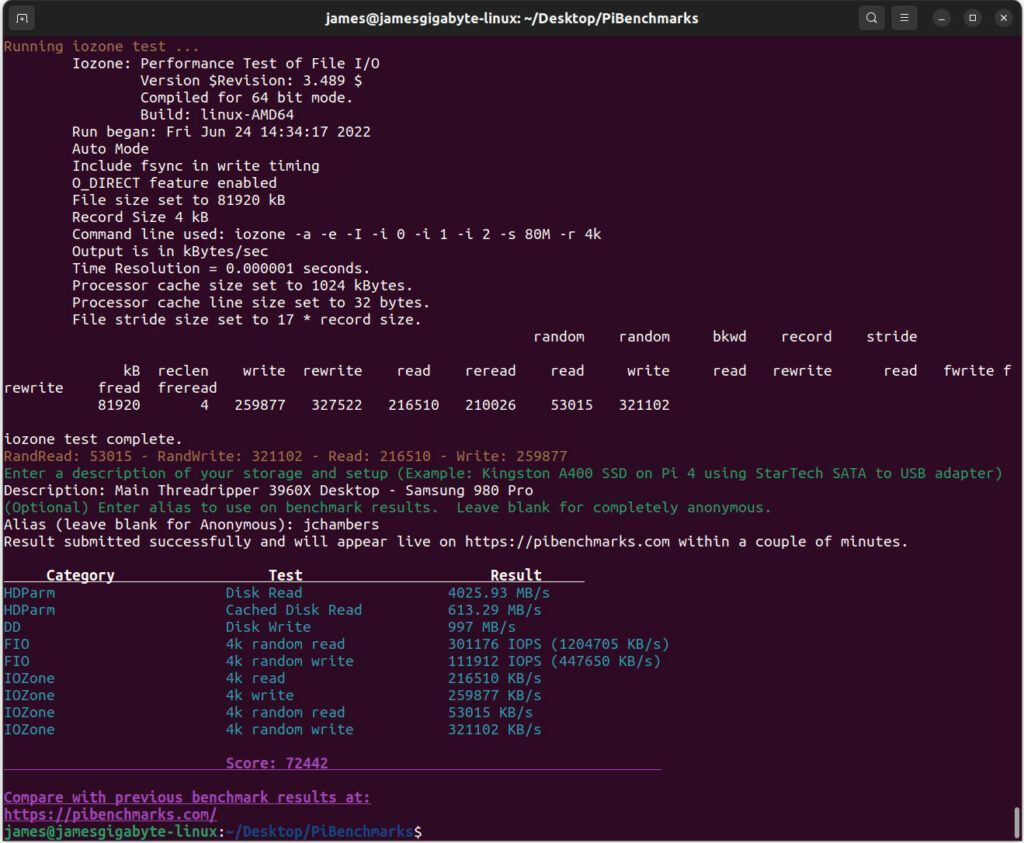 When attempting to determine storage performance on Linux there are common tests such as doing a DD write command and measuring the speed of that. These methods leave a lot to be desired and are especially bad at measuring random read/write performance (the most important for operating system / application performance).

I solved this problem for the Raspberry Pi by creating Pi Benchmarks. This is an open source benchmark that *does* measure random read/write performance as well as several other important factors (IOPS, etc.). We’ve collected many years worth of performance data across thousands of different drives including SSDs / HDDs / others. It’s enough information to be used to make important decisions about performance using hard data.

I’d like to announce that this exact same benchmark is now available for all devices! If you’d previously taken the benchmark on a PC or device other than a Raspberry Pi those results are now retroactively live on the site.

PiBenchmarks.com is now several years old. It has over 31,000 identified benchmarks. Previously only results from the Raspberry Pi would show live on the site.

Let’s take a look at a list of some of the models that were added and how to run the benchmark! I recently covered all the pieces you need for a complete setup to work with the Raspberry Pi Compute Module 4. Today I want to cover the whole reason I wanted to investigate the Compute Module 4: The PCI express capabilities!

In this guide I’ll cover a couple of 1x PCIe to NVMe adapters I picked up to try doing this with as well as full configuration and setup instructions. Let us begin!